Bashir Adepoju Bakare, a.k.a Bash Bakr, was born 16th of September 1982, on the Island of Lagos. His education began in West-Africa to the North-Central Africa. he's currently the President of Eko Arts Academy, the Director Diamond Pen International, and Continent Representative of Strategic Books Agency U.S.A.

His debut, celebrated novel, ‘Graveyard of an Anarchy’ was written within a space of 3years, partly out of passion, partly because from the very beginning, he has sought to establish a connection between arts and living. His second novel ‘Crossroad’, which is at the final stage of production, was written immediately after the first, at a period when there was no green light and he was unsure of his ability to attract the big, vibrant publishing industries. But notwithstanding, he went ahead all the same, doing his thing.

When asked, Bash stated delightfully that both novels evolved almost at the same time, each completely different from the other, in style and layout. He admitted writing the two books was time consuming, as he practically lost touch with other vital endeavors of life during the process, but he was quick to mention that, at last, it all worth the effort seeing his book move to the world stage in 2009.

As the Nigerian-born author, takes a bold stride towards greatness in the world of creativity, his immediate intent is to publish eight exhilarating, amazing and empowering books, dedicated to each of the eight continents of the world. 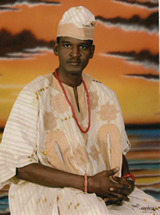